Exclusive all 45s mixtape and Interview with the Forty Five Kings collective boss, hailing all the way from Melbourne, Australia: Mr Lob ! 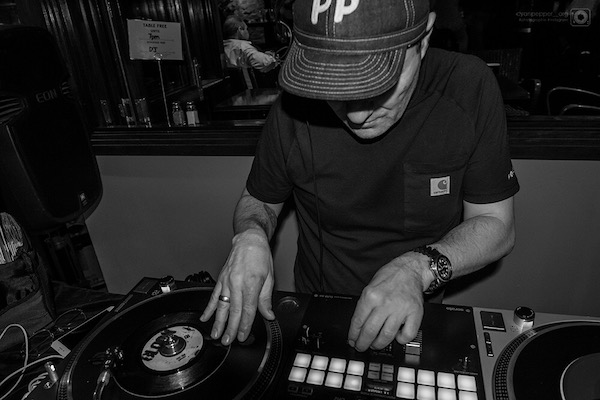 Over 20 years in the game and now leader of one of the coolest online DJ communities, the Forty Five Kings, Mr Lob is a legend and we're excited to showcase a killer exclusive mixtape and extensive interview !


Put your headphones on and get ready for a treat... And read on for Mr Lob's interview !

After years of backpacking around the World, a few successful stints at guiding sustainable tours in South-East Asia, and with a serious passion for vinyl, Mr Lob decided just over 2 years ago that it was time for all his friends in the dj community to join forces and build a Global online platform... Picking 7" format as a common thread, he launched the (now massive) Forty Five Kings community... We spoke to the funkiest Aussie ever over phone and emails to pick his brain - check it : 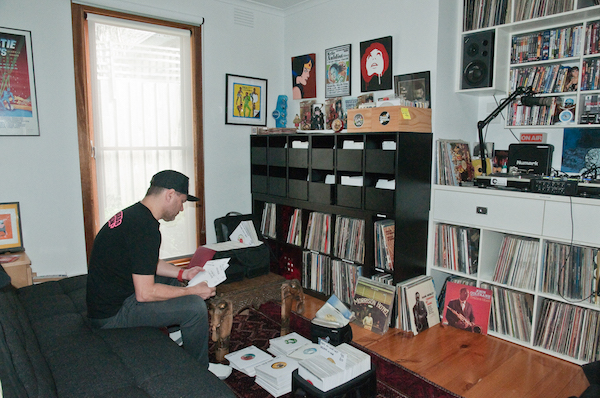 First of all Mr Lob, thank you so much for sharing a killer mixtape with us. It's great to hear different grooves from you and see that you captured the Asymetrics vibe, we loved it !

Thank you for the invitation and opportunity to do this mixtape. It was great to be introduced to you by Dj DSK from DNA Records.

For this mix I wanted to step outside of what I have been known for since forming the Forty Five Kings Collective, where in streams to keep it interesting visually I’ve tended to play more upbeat funk and hip hop based sounds.

I’ve been a dj and collector for a long time and have a real passion for Afro and Latin sounds, particularly if they are jazzy, funky and/or soulful.

I profess to knowing nothing about much of the music I play in this mix, except to say that if it sounds good to me, I recognize the label or artist and I can hear in my head how the tracks selected will flow together to create the mood I’m going for, then that 45 is a winner for me!

I always try to create a mood and flow with a mix based on how I’m feeling at the time, more than simply always trying to have a perfectly beat matched unbroken flow, I like intros and outros!

I also thought this was a real opportunity to reach a new audience that understands the vibe I’m going for and I see every opportunity as an experience to share and form links.

- The Forty Five Kings have been active for just about 2 years, and you've seen the participation of an impressive list of DJs from all around the World, congrats ! What are some of your personal highlights in these adventures ?

To tell you the truth so much has happened and come out of the experience of forming the Forty Five Kings with my co founder Fatwax45, it’s hard to just pick a few. The overall experience has been one of support, friendship, sharing our passion for the 45 format, supporting labels, artists, producers and resellers as well as each other and hearing so much great music from so many djs and collectors I would never have ever got to meet and hear.

So many great Djs have joined us, streamed for us, provided a mix, an interview, designs, logos, donated to our annual Raffles and supported me directly by sending me 45s both to review and as a thank you for the impact the kings are having.

Besides the weekly Coffee & Donuts show, we have the Hump Day 45s show every Wednesday and the monthly Reggae Fire and Bright As The Sun stream shows.

The website is full of great interviews, feature stories, mixes, video sets, 45 reviews and dope merchandise and is really a celebration of everything we’ve done and are doing.

It’s really exceeded my initial idea to bring together the 45 community and work together to support and grow the scene.

One of the proudest things for me is the awareness we have raised about mental health through being part of the monthly Sunday 7s live stream show and the huge donation I was able to give to Movember through the Forty Five Kings Raffle this year.

I would like to shout out my Co-Founder Fatwax45 for his passion, support, knowledge and for battling through health issues to fronting up every week with amazing sets on Coffee & Donuts.

We also could not have achieved what we have without 25ThC, the man behind 45 Day, who joined us in our first year and has driven our online Twitch presence and given his heart, time and passion to the channel with numerous country based dj streams and also bringing together the Forty Five Queens and 45 Kids Streams as well as overseeing the weekly Coffee & Donuts lineup.

- With the massive network you built and the enthusiasm around the platform, are you guys also thinking of starting a label ?

There has been some talk but right now we have no solid plans. With covid, pressing plant delays, cost increases, crazy postage prices and wait times, we are holding off for now but hopefully one day we will!

- Silly question, but many different DJs will have a different answer: what attracted you to 45s primarily rather than LPs ?

I love both and to me there is nothing better than putting an LP on and sitting back in my favourite chair and digesting the majesty of a long player.

However, I’ve loved 45s since I was a kid, I remember hearing and seeing my mum play them and now my son plays my mum’s 45s and has them in his collection.

They were also the cheapest way to access music when I was a kid (I’m 52), they are portable and easier to bear the weight of and when you think about it, these were what the artist and label considered to be their best work, their most accessible, their bombs, the tracks that would make them a star!

As a dj I love the work rate you have with them and how you are always thinking 2 – 3 tracks ahead and how each one stands alone as a short piece of music.

Anyone that plays 45s and that mixes them, knows there is another level of difficulty with them and I just love the old school style of djing using them.

Plus much of the music I loved came out on that 45 and continues to do so.

Today with the amount of edits, remixes, bootlegs, mashups and resissues out there, besides what is being released new, much is geared towards the dance floor and for making it easier for djs to mix and that helps for sure but really for me it’s about the format first and the music I can then access on that format.

In the end though they are just a beautiful thing to own, collect, play and admire!

I have been asked this before and I don’t remember, but I have some memories of buying some hip hop 45s after my brother brought home The Message in 1982 and before then I bought pop hits and things like the Beatles in 2nd hand stores.

- How about the last one (or the standout one in your last batch)?

That’s impossible to answer but one that comes to mind is Soul Supreme’s Check The Rhime. It’s of course ATCQ cover but I just can’t get enough of it. It’s funky, jazzy, beautifully produced and has all the elements in it I love in a song. I really wish I had a second copy. 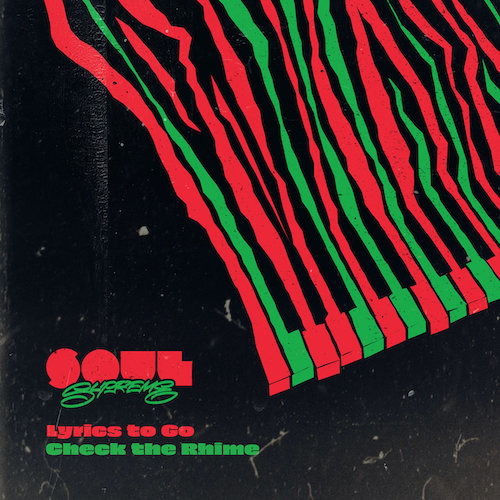 - What's your top 5 records in your collection ?

I never really think this way about my collection and never check discogs prices to see the value of what I have. My feeling is that everything I own I bought for a reason. I never sell records and I have a rule that I won’t pay high prices for 45s and I refuse to pay speculative prices, if I miss it, I miss it.

For me really the records I love the most are my Blue Note album collection, Marvin Gaye’s ‘What’s Going On’, ‘Blazing Arrow’ by Blackalicious, ‘Home’ by Spearhead and anything by Freddie Hubbard.

I don’t think I have any records that are particularly valuable and having been tight for money most of my life I have bought what I can afford and this has often times been a reissue rather than an OG pressing.

That’s a hard one as it changes depends on my mood, the booking requirements etc Big faves to open with though are Sly5thAve’s ‘Let Me Ride’ and I love to finish with a positive note with say William De Vaughn’s ‘Be Thankful For What You’ve Got’ - 1980 Special Edited Version on tec records or Coke Escavado’s ‘I Wouldn’t Change A Thing’:

- Do you prepare your sets in advance, or fully improvise ?

Generally I choose more 45s than I need while thinking about the mood, flow, bpms and how I think they will work together, I also think about the venue, event and time slot and try to prepare accordingly, but from there it is all improvised!

I’ve never been a dj that just plays the hits or requests that don’t fit the vibe I’m working on. As you can imagine this has often been both successful and a disaster, sometimes within the same set!

I’ve seen so many incredible sets and I’m a huge fan of Fatwax45, week in week out, he pulls out the bomb after bomb. His crates and collecting habits run deep.

I love watching Dj Robert Smith play, he is a master and super funky and soulful.

My favourite set really though is by the legend Dj Andy Smith who played on our 2 Year Anniversary stream recently, just an incredible dj...

- You've traveled extensively throughout S/E Asia, can you name some of your top 45s from the region ? Are you into any particular styles (Molam, Luk Thung, Gamelan etc.)

Great question! I unfortunately don’t own any 45s from South East Asia, but I am partial to local music wherever I go and loved what I have heard of Luk Thung and some of the pop music out of Thailand in the 60s and 70s and a few years ago I made a mix of all the Thai songs I liked:


I also really like Thai Reggae music and have met quite a few electronic producers and djs in Thailand who make world class music.

- Any particular genre that you particularly affectionate ? And can you list a few of your favorite artists ?

For Soul and Funk, Marvin Gaye, Curtis Mayfield, Sly and The Family Stone, Parliament/Funkadelic and hundreds of others!

For Hip Hop I lean towards golden era sounds that are funky, sample based and have dope lyrics like Pete Rock and C.L Smooth and earlier stuff like Big Daddy Kane and albums like Check Your Head, Paul’s Boutique, Fear Of A Black Planet, Paid In Full, NIA, Blazing Arrow etc.

Really though I love so many genres of music and building up a really good Mixcloud following, hosting my radio show The Sounds You Hear on nessradio.com and doing streams for The Forty Five Kings has really allowed me to stretch out, become a better dj and touch on and go deeper into many of the genres I love.


Huge thanks to Mr Lob for taking time & sharing with the Asymetrics !